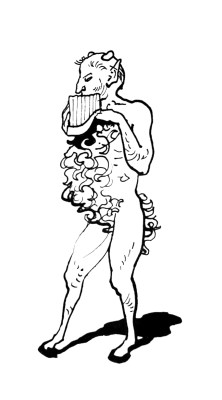 The Pan Flute is one of the oldest musical instruments. Its origin reaches back as far as the beginning of civilization. The Pan flute was already being made in this area from hollow animal bones held together by calf rope. In the past it has been constructed from reed, cane and bamboo.

The name "Pan" came from Greek mythology. According to old stories from the Greek region "Arcadia", the God Pan was the protector of pastoral people and their herds. Pan fell in love with a beautiful nymph called Syrinx. However, it was of little surprise that nymph was unable to show similar feelings of love to a half man half goat creator. When Pan's interest became insufferable she ran away from him. However, Pan has been pursuing her continuously until they reached the river. Syrinx had no place to escape to. On her own accord the ruler of all gods Zeus changed her into cane. However, Pan's love was so strong that he made the cane into a flute and during some evenings he played sad songs to remind himself of his love for Syrinx.